ISBISTER CHAMBERED CAIRN - THE 'TOMB OF THE EAGLES'
On a summer’s evening in 1958, Orkney farmer Ronnie Simison noticed a section of horizontal stones exposed near the sandstone cliffs bordering his farmland. Digging down beside the drystone wall, he found a cache of beautiful polished artefacts – a mace head, three stone axe heads, a black ‘button’ and a small Chert knife. This chance discovery changed life for Ronnie and his family forever, and led to the creation of one of Orkney’s leading visitor attractions.

Returning a few days after his initial find, Ronnie was amazed when he uncovered a small stone chamber containing about 30 human skulls. What he had at first thought might be a dwelling place was later confirmed to be a 5,000 year old Neolithic Stone Age tomb.

Alongside the human bones were the talons and bones of an estimated 14 white-tailed or ‘sea’ eagles - the only tomb in Orkney with such a density of eagle bones. The site became known as the ‘Tomb of the Eagles’, and it raises many questions about the significance of these birds in the lives of the ancestors.

Inland from the Stone Age tomb, Ronnie discovered a 3,000 year-old Bronze Age site. Excavations revealed a building complete with stone trough, water system and hearth, adjacent to a mound of burnt stone. Archaeologists agree that water was heated in the trough but there is much debate about how it was used.

Research is on-going following excavations at Meur (Sanday), Links of Notland (Westray) and geo-archaeological sampling from here at Liddle.

For Ronnie and his wife Morgan, the discovery of these sites on their farmland sparked a lifelong passion for archaeology, and led them to create an extraordinary visitor attraction, now managed by two of their daughters.

It is with great regret that we announce the Tomb of the Eagles is to close permanently. Unfortunately, the practicalities of safely operating the unique hands-on visitor experience in the current climate have led us to this very hard decision.
As a family, we would like to thank everyone who has visited and been a part of the Tomb of the Eagles since Ronnie's discovery of the site in the summer of 1958.

These original photographs show the Isbister Chambered Cairn and the Bronze Age building during excavation and as they are today. 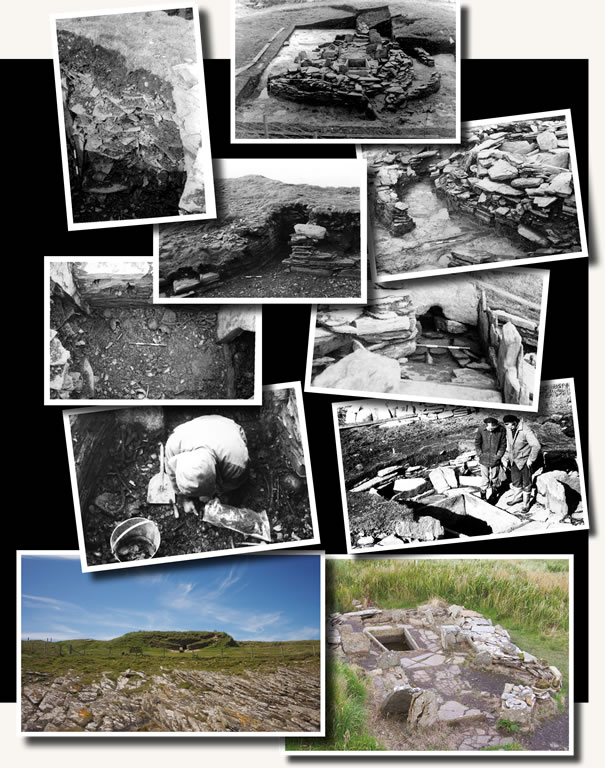