Without Ronnie Simison, the Isbister Chambered Cairn and Bronze Age site at Liddle may never have been discovered. When he first uncovered evidence of the Stone Age site in 1958, little did he know how those few rocks he saw exposed at the surface would change their family’s lives forever.

After the initial discovery, Ronnie waited almost 20 years to find out what lay beneath the surface. It was only after observing the painstaking work of the professional archaeologists who excavated the Bronze Age site that Ronnie began work on the Stone Age tomb. His patient and meticulous approach earned the professionals’ respect, and what he found was unparalleled at that time.

Ronnie developed a passion for archaeology and, together with his wife Morgan, embarked on a lifelong journey of learning and discovery. After sharing their enthusiasm with visitors in the farmhouse conservatory for many years, the family went on to create a visitor centre on their farm which is now one of Orkney’s most popular sites. 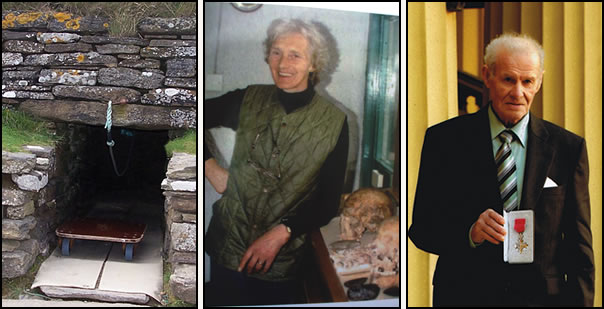 It is with great regret that we announce the Tomb of the Eagles is to close permanently. Unfortunately, the practicalities of safely operating the unique hands-on visitor experience in the current climate have led us to this very hard decision.
As a family, we would like to thank everyone who has visited and been a part of the Tomb of the Eagles since Ronnie's discovery of the site in the summer of 1958.

Their interest was not only in studying and learning about the tomb and its contents, but in sharing it with the public. Ronnie and Morgan created something truly unique, which has made an important contribution to promoting archaeological tourism in Orkney. This was recognised when Ronnie was awarded the MBE in 2008.

It is a fitting tribute to Ronnie that, in the final year of his life, a new gallery has opened at the visitor centre. It adds a fresh dimension to the visitor experience, exploring the earlier Mesolithic period of Orkney’s pre-history and the latest techniques used to study it. This innovation aptly reflects the spirit of a couple who worked tirelessly to share their passion for history in new and interesting ways.

Ronnie and Morgan are greatly missed by those who knew and loved them, but their legacy lives on.